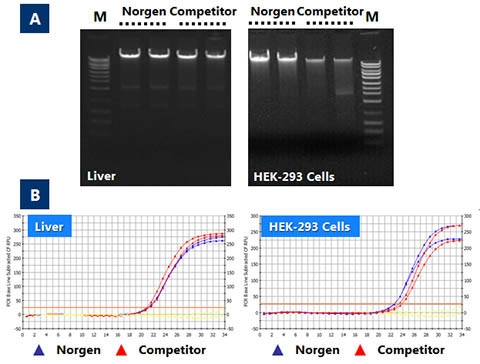 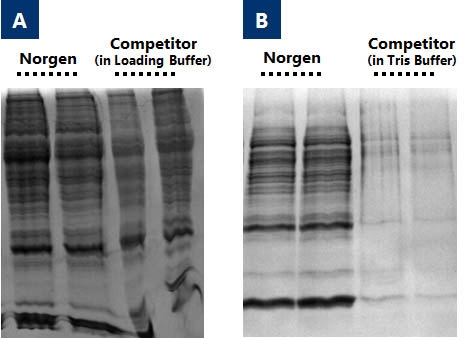 The kit employs two columns: 1) for gDNA purification and 2) for RNA purification utilizing silicon carbide columns (superior for the binding of all RNA sizes including miRNA).  The proteins are also purified on the second column after RNA elution. The proteins are eluted in buffer and are ready for downstream application  without any further clean up required. The proteins can be quantified directly,  used in western blots, ELISA or mass spectrometry.

This kit is ideal for researchers who are interested in studying the genome, proteome and transcriptome of a single sample, such as for studies of microRNA profiling, gene expression including gene silencing experiments or mRNA knockdowns, studies involving biomarker discovery, and for characterization of cultured cell lines. Norgen’s RNA/DNA/Protein Purification Plus Kit is especially useful for researchers who are isolating macromolecules from precious, difficult to obtain or small samples such as biopsy materials or single foci from cell cultures, as it eliminates the need to fractionate the sample. Furthermore, analysis will be more reliable since the RNA, DNA and proteins are derived from the same sample, thereby eliminating inconsistent results. The purified macromolecules are of the highest purity and can be used in a number of different downstream applications.
The purified RNA, DNA and proteins are of the highest integrity and can be used in a number of downstream applications.

1 in stock (can be backordered)

There are no reviews yet.